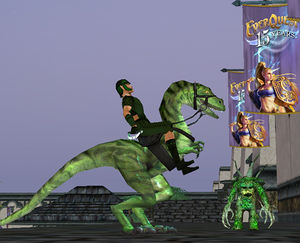 Heroic Characters are characters that begin at level 85. They were added to EverQuest on March 12, 2014.

Players will have the option to create a Heroic Character when they log into their account and use the Upgrade Character button from the Character Creation Screen.

The platinum, Bayle Marks, food and drink a Heroic Character starts with is a one-time offering, rewarded to the first character you create or upgrade using the feature. If you delete your character and make a new one, you will not receive these items again.

After the trial period, if a player deletes their Heroic Character it works just like deleting ANY character on their account. It's just deleted. They won't get another free Heroic Character after 3/26/2014 (unless they offer these for free again in the future).

All Heroic Characters start with:

All skills will be maxed for your level, with the exception of Language and tradeskills.

Heroic Characters will have the following arcane specializations:

Go to a lower level zone, and try your spells and AA's. That might 10-15 hours easily. Then, group with people that might help you. By the way, since you very likely wear the heroic gear, all people can recognize that you're a heroic character (you're clad in green gear). So, be upfront about your lack of knowledge.