The King's Court Casino is a casino in Shadowhaven. It was first introduced with the December 18, 2003 patch. 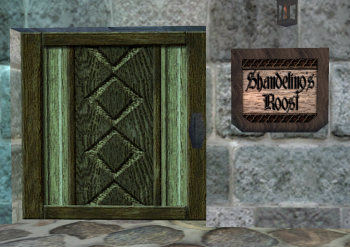 Copy/paste that into your shadowhaven_1.txt file in your map folder.

You can also use the Find Window (default Ctrl-F) to find it (Shandeling's Casino).

You can buy King's Court Tokens from two merchants nearby.

Note: In order to make sure you can use the item, only give your token to the dealer corresponding to your class. If in doubt, hail the NPC first. Their responses:

Turn in your token, and in return you can receive a variety of things:

One of the items you can win at the Casino is a Gold Ticket. You can also purchase them from other players in The Bazaar or buy them for 960 Loyalty Tokens (Crowns).

Should you be lucky enough to snag a Gold Ticket, turn it into Jacob Thornblade upstairs for what is typically a very nice reward. However, before you hand it in, it might be a good idea to review how it works below.

You can receive one of eight items after turning in your Gold Ticket, two of which are No Drop. If you already have an item in your inventory, you won't get another.

The six tradeable items are:

Instead of the Gauntlets, you may possibly get the Vibrating Hammer of Infuse, but it is suspected that it has to do more with transmuting the Gauntlets into these.

The two No Drop items are:

Although Allakhazam's lists the Glowing White Drum as an item you may win, you might only get Black Drogmor.

When you turn-in your ticket to Jacob Thornblade, sometimes you'll get the following message:

This means you have the item already that Jacob Thornblade just tried to give you. Just keep resubmitting your ticket until you get an item. With all tradeable items, the Guise of the Deceiver mask is reported to drop first each time, then took quite a few retries to get the Glowing Black Drum.

It is worth noting that the two No Drop items are NOT lore so that you may possibly get two if you are trying to get one of the other items. However, it is suspected that the game knows if you have these items also because of the numerous retries of attempting to get the drum.

Upon turning in a gold ticket for a reward, a shout is heard across the zone:

Most of this information comes from Allakhazam and posts there from players.