Mercenaries (Mercs) were added with the Seeds of Destruction expansion. They are player-controlled NPCs which act as group members. The Call of the Forsaken expansion introduced Mercenary Equipment your mercenary can wear. 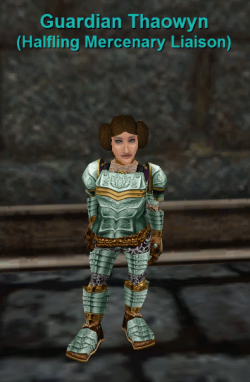 Mercenaries are purchased in the Plane of Knowledge and in starting cities from NPCs, like Guardian Thaowyn. They may be found using the Find window (Ctrl-F).

Mercs are to be constantly tweaked to be sure they are viable as an alternative to grouping (as opposed to being preferred over grouping). In other words, they should only be desired as a last option.

There is a platinum cost associated with purchasing a mercenary. There is also a smaller recurring charge associated with upkeep (charged every 15 minutes). You can see the costs before hiring them. The amount you'll pay should be recoverable through normal experiencing and vendor-loot drops.

Mercenaries level up as you do. As you both increase in levels your recurring cost will adjust to the new levels.

The race of your merc has no effect upon anything other than appearance.

The name of your mercenary is determined by SOE. If you wish to choose the name of your mercenary, you may do so by using a Potion of Mercenary Amnesia purchased from the Marketplace with Station Cash. The normal SOE naming regulations that characters must follow apply to your mercenary's name. The potion names the mercenary slot, so if you have multiple mercenaries, you need a potion for each one you wish to rename. If you dismiss the mercenary and get another one, that one will retain the name you have given the previous one, as long as it uses the same "slot".

Characters start with one slot. The maximum number of mercenaries you can have is eleven. You can only use one at a time.

Mercenaries can be hired from various Guardians in the Plane of Knowledge as well as from NPCs in starting cities. You can use the find command (CTRL + F) to locate such vendors.

The May 18, 2022 game update removed tiers from mercenaries.

Your Mercenary can come in two skill levels

Mercenaries have a chance to 'lose confidence' in your group based on the number and /con of the mobs being fought. Adds and Crowd control methods will additionally modify this percentage. Once confidence is lost, the mercenary is effectively worthless in a fight, unless crowd control methods come into play, creating a chance for it to regain its confidence.

Healers are very similar to Clerics, in that they cast a lot of the same buffs and spells. they are not as good as a real PC as the AI is not as skillful as a person has the potential of being. That being said, they are better than not having a healer in general.

A healer will buff your group, keep the group healed as needed, primarily focusing on their owner and then the MA.

You can set your healer merc to Balanced, Efficient, Passive, or Reactive.

On Efficient, and maybe Balanced, they will cast Complete Heal, which 99.99% of the time you do not want.

When will they buff

If you are grouped with characters that are so much lower in level then you are that the buffs for your level will not work for them, the merc cleric will not use buffs that will work on them. Merc clerics will only cast spells of their level.

Tanks are similar to Warriors, in that they use a lot of the same Disc's. As with the Cleric, they are never as good as a real player, however, they are much better than a silk class tanking.

They will try to keep Aggro if set in Aggressive stance, and they seem to be able to use their discs to the group's advantage.

(Tank mercs can not be designated MA at this time. You get the message that NPCs can't be main assist)

DPS, or damage dealing, mercs have been added. You may choose a rogue or wizard mercenary.

Using a tank mercenary with "Auto Assist" disabled, the merc will wait for the "Call Assist" button to be pressed before engaging any targets. When the "Call Assist" button is pressed, all targets currently on the group enemy list (that are in his awareness range) will be added as valid targets and he will begin attacking using the normal AI for determining targets.

Using a healer mercenary with "Auto Assist" disabled, the merc will behave normally except you can press the "Call Assist" button to override normal rules for not healing pullers. If a puller is in the awareness range of the healer merc when "Call Assist" is pressed, it will have a 3 second window where it can drop a heal on them.

Mercenaries are considered group members and take the same portion of xp that group members do. You also get the bonus for filling up your group.

Beginning with the release of the House of Thule expansion, you'll get a bonus for each real player in a group. A full group of 6 will get 22% more than a group of 3 people and 3 mercs. 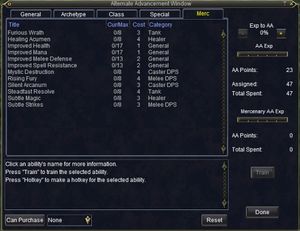 Healer mercenaries will have a tendency to use delayed heals and other slow healing spells, which can be problematic, since these can provide insufficient healing, and take time away from the merc to cast good heals. The workaround consists of blocking certain spells on the recipient of the heal spell, be this character or pet. Doing this can significantly increase survivability when relying on mercenary healing. Spell blocking has to be done for spells relevant for current level range; as the hiring character levels up, the mercenary will start to use new spells, and some of these will be of the delayed heal type, or other unwanted heals.

The following command will add some, but not all, spells to be blocked at different levels:

More than one healer merc[edit]

If survivability is an issue, and there is room in the party, two characters can each use a healer mercenary at the same time. In these cases it can be an advantage to have the healers in different modes, since two healers in same mode (say for example Reactionary) will have a tendency to cast the same healing spell on the same character at the same time. This can result in overhealing in some situations, as well as underhealing in others.

While DPS mercenaries is certainly better than nothing, they fall seriously behind at higher levels, and will often not be worth the xp cut. Some boxers will run an extra character for dps instead, leveling the character to the relevant level, having the character subscribed at least a single month to get autogranted AAs, and run it as a secondary character. While any character can be run in this manner, wizards, mages, and druids are often chosen for this role, for reasons of manageability and for added utility.