Quillmane is a mob in South Karana. She is mainly useful because she drops the Pegasus Feather Cloak (Effect: Levitation).

The following is taken from Echelon's Quillmane Spoiler (via Wayback Machine). It is posted here as a precaution in case that page disappears (which it did).

South Karana is home to many named and quest mobs. If the named you are looking for is not up, there is a placeholder (a.k.a. PH) wandering somewhere in the zone that you will need to find. A good starting place to find a PH for a named is at the Lair of the Splitpaw. Most, if not all, PH's will eventually path through Splitpaw. Some PH's will walk north to south and some will walk south to north but they will all walk straight through paw at some point in their travels. If a named is up, they will also path through paw just like their PH's do.

The PH's for many named are basically wandering yard trash; the key word being wandering. All PH's and the named mobs wander. Do not kill static mobs as they are not PH's. The aviaks at the tree city are not PH's. The gnolls at Splitpaw are not PH's. The gnolls wandering around Splitpaw are only PH's for the named gnolls. The wandering PH mobs that you are looking for to spawn Brother Qwinn, Quillmane or other named mobs are often lions, wolfs, centaurs, elephants, aviaks, escaped splitpaw gnolls with an occasional cyclops, treant or other unusual mob. Don't get hung up on the type of PH that is spawning. The key to popping your named is where in the zone your PH's are spawning. There are a few cycles such as a named centaur who's PH's are always centaurs and a named aviak who's PH's are always aviaks, but these are an exception.

Once you kill a PH on one of these named "cycles", another PH should pop in 66 seconds. If another mob spawns 66 seconds after you kill something, you are probably now on a cycle of one of a dozen or more possible named. You can continue to kill mobs that spawn every 66 seconds until a named pops. Static mobs in the zone respawn about every 6 minutes. I have observed some cycles that pop PH's around every 36 seconds. Shaman Ren'Rex appears to spawn on one of these 36 second cycles. Killing Ren'Rex immediately spawns High Shaman Grisok, but you get either Ren'Rex or another PH in 36 seconds.

Now to make this work:

You need a tracker with tracking sort set to normal. Preferably a ranger with max tracking AA's. New mobs spawning in the zone appear at the top of the list using "normal" tracking.

You need to be patient to use this method. Finding named using this method is surgical. However, I have proven time and again that this method is faster than slaughtering everything in the zone over and over again. I tend to work one cycle at a time, killing one PH every 66 seconds until I feel comfortable that it's the cycle I'm looking for.

Because this method is surgical and requires tracking, other people hunting or slaughtering in the zone may confuse your tracker with their repops. Your tracker may be able to work around this if he is very exacting on his 66 second repop timer.

Keep in mind that once your named pops and dies, the PH cycle continues every 66 seconds. You will either get the same named in 66 seconds or another PH. I often chain spawn Quillmane for those that want/need.

Because some mobs on certain cycles can pop in the extreme north or south part of the zone, this can often happen out of the range of the trackers ability. The tracker may have to run around the zone a bit to pick up his new spawn. Again, it is difficult to do this if others are hunting in the zone and popping respawns.

I often use a familiar as a placeholder on tracking sort to help me keep track of new and old spawns. I kill the familiar and recast it as I feel necessary. Refreshing your track window as soon as you kill a PH and keeping it open until 66 seconds rolls around helps keep you organized too.

If you spawn the wrong named, leave it up. That way you won't hunt that particular wrong PH cycle again.

I usually wait on the north or south side of Splitpaw and observe the wandering PH's that roam from the north or south. When I'm trying to locate the Quillmane cycle, I tend to watch for lions, lionesses, escaped splitpaw gnolls or "an elephant".

Fabled creatures spawn on the same cycle as regular named. Sometimes a new mob may just appear on track for no apparent reason. This may be due to the game randomly despawning and respawning mobs, mobs of different factions slaying each other or mobs that spawn/despawn based on the time of day. 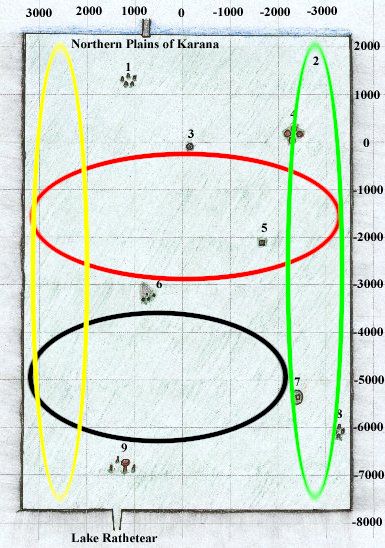 BLACK - Typical Quillmane spawn area (66 second cycle). From my experience, PH's for Quillmane always pop south of Paw with many of the PH's popping towards the west wall. Other PH's can pop to the south or east but if many are popping near the west part of the zone and south of Paw, you are probably on the Quillmane cycle. Quillmane's PH's typically path northish once they start roaming however PHs that spawn in the east half of the zone may walk directly west or north west towards Splitpaw. When an elephant spawns on this cycle, it is always "an elephant" and no other type of elephant. Expect lots of lions and lionesses on this cycle. Quillmane does not drop the cloak every time he spawns.

YELLOW - Typical Brother Qwinn spawn area (66 second cycle). Brother Qwinns PH's pop anywhere along the west wall of the zone. Most of the PH's for Qwinn pop in the southwest but they can also pop in the northwest. But the PH's always pop towards the west wall of the zone. Brother Qwinns cycle is unusual in that he shares a cycle with another named - Narra Tanith. Kill Narra if she spawns as you would a PH. Qwinn does not give any type of faction hit and from my experience, must be visibly wearing the robe to drop it.