The Planes of Power flagging guide

Note: This is now mostly obsolete, as being level 62 or higher will get you into almost all of the Planes of Power zones.

So you want to see the Elemental Planes? It's not going to be easy. You're going to need a solid raiding force and a lot of dedication to get there. The chart below gives a quick overview.

At this point you should have killed Mithaniel Marr, Saryn, Tallon, and Vallon Zek. Now find the seer in Plane of Knowledge - she's in the building right at zone in from Plane of Tranquility.

Sit down and say "unlock my memories" She won't necessarily have anything to say - this is for fixing flags if you do them out of order.

Now go to Maelin. He is a gnome in the Plane of Knowledge library. To get to him go to the bottom floor of the library and find the elevator (it has a button in the wall). Ride the elevator up to the top and he's behind the table in front of a bookshelf.

Hail him and say 'I have new information' and 'I have new lore'. You may need to do this a few times. Eventually he will tell you that you need to go find Rallos Zek. If you don't get this go back to the seer, sit, then say "guided meditation" you should see this:

If you don't see this, go back through the guide and see what you're missing. Otherwise, you are ready for Solusek Ro's Tower.

In addition to Solusek Ro's chamber, killing Rallos Zek also unlocks the way to the other three elemental planes. Once you have killed Rallos along with the other listed flag mobs (Agnarr, etc.) Go to Maelin, and you should see this:

At this point you should have four elemental shields, one drops from each of the elemental gods.

Now you need to combine them. There is a book found on a slave in Plane of Tactics which contains this vital information.

I believe though if you were to create an unfired medium container and then fire it with two high quality firing sheets covered in Multielemental glaze it would create an invulnerable container. To make the multielement glaze, you will need to mix together the four base element glazes: windy glaze, aqua glaze, earthen glaze, and magma glaze in a glaze mortar.

I dare not imagine why you would need to combine the quintessence of the elements, or what you would do with it. Please consider my time here spent well, and set my soul at rest. I have toiled here for long.

What this means is that you must combine your four elemental shields and combine them inside an odylic vial. To create the odylic vial, follow the instructions from the book:

Combine windy glaze, aqua glaze, earthen glaze, and magma glaze in a glaze mortar. (These glazes are made from components found inside each of the elemental planes)

Combine 1 block of clay, 1 medium jar sketch, and 1 flask of water on a pottery wheel.

Combine the unfired medium container with 2 high quality firing sheets and the multi-elemental glaze in a Tanaan kiln (e.g. the one in Plane of Knowledge). **NOTE:** This item is not no-drop so your guild will only need one.

If you did all this correctly, you now have a 4-slot container called an odylic vial. If you're having problems creating the vial, I refer you to EQTraders for the recipes. Place the 4 elemental shields you have (globe, sphere, cloud, and mound) inside, and combine. The result should be the Quintessence of Elements:

Now take your nice flashy new quintessence (which for some odd reason has the same graphic as the scepter of Al`kabor) and hail Maelin in the library of Plane of Knowledge.

Almost done now, head to the Plane of Innovation and bring along someone who has a key to the Factory. Open the door to the factory and immediately turn left inside the first room, open the door there and you will find Chronographer Muon, a robot, in the back left corner. Hail him...

At this point you get transported to an otherwise unreachable section of the zone. At the end of the walkway you will find your good friend Maelin along with a time machine.

Well, you've done it. What are you waiting for? Click the time machine in the middle and you will be transported to the Plane of Time. 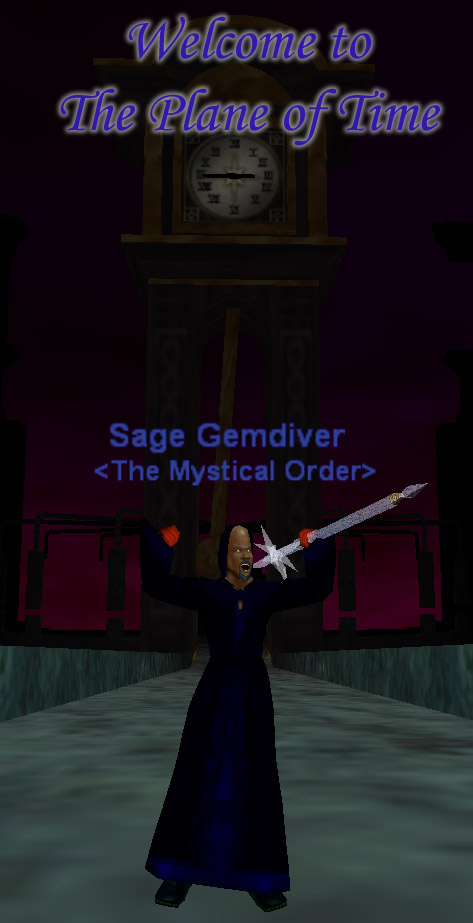