The city of Katta Castrum is constructed in a set of three concentric circles.

The city center is known as the Sanctum, and is marked green on the map below.

The next circle is called the Inner Circle and is indicated in yellow.

The last circle is the Outer Circle, shaded in pink. 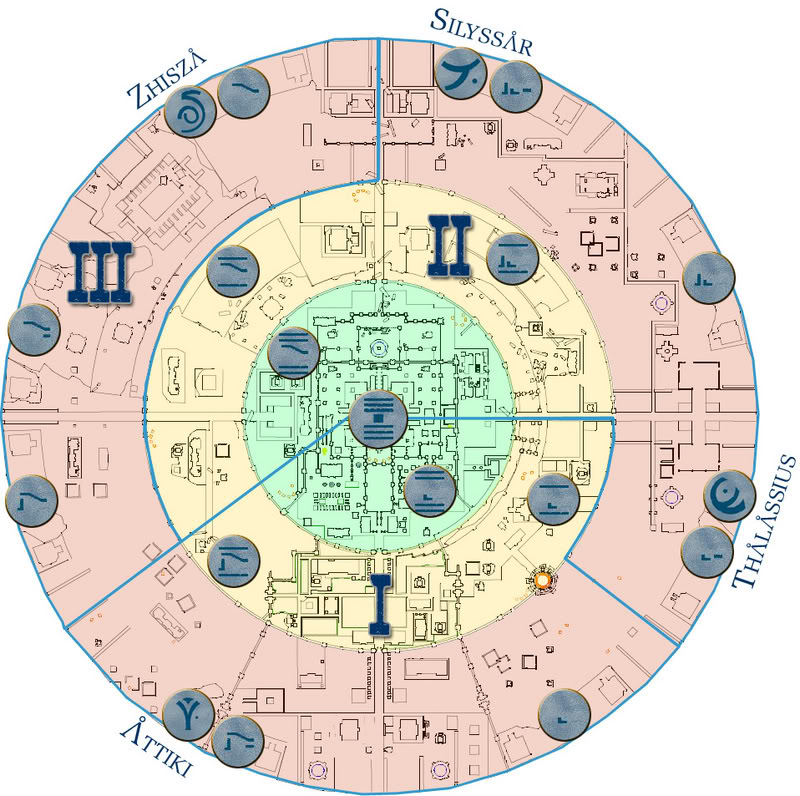 Distributed across the city, there are a number of teleportation pads, which allow you quicker travel from one area to another. There are two teleporters inside the library/temple in the center of the city, two more portals in the Sanctum area, four portals in the Inner circle, and eight sets of three portals each in the Outer circle. Also, part of the sets in the Outer circle are four special portals that take you to the four habitats, Jewel of Atiiki, Thalassius, Zhisza and Silyssar.

In order to be able to use these teleporters you must first complete a number of quests to attune the portals to yourself. These quests are given by Archarcanist Kirstmycl at the southeast portal in the Sanctum. The quests ask you to visit certain portals and collect keys from them. The keys will spawn on your cursor when you step on those portals. Be aware though! You may get ambushed at some of the portals.

The blue lines on the map indicate which portals you need to travel to in each of the quests. Once you have completed a quest, you can use the teleporters to transport yourself to the portals of that quest.

Each portal (or set of portals) has a unique symbol attached to it. Navigating from portal to portal is done by clicking or stepping on the symbols on the teleportation platform. (The exception are the portals in the temple, which aren’t a platform but rather a tube of spinning rings)

Not all portals are directly connected to each other, so you may need to use two or three portals to reach your destination, depending on where you want to go.

While the symbols might be confusing at first, there is a system to reading them.

First, we should look at the horizontal bars at the top and bottom of some symbols.

The Portal in the Library has three bars:

The Sanctum portals have two bars:

The Inner Portals have one bar:

And the Outer Portals have no bars at all:

So with this knowledge you should be easily able to navigate from one of the Outer portals back to the Sanctum, by just clicking on the symbols with increasing number of bars.

Navigating from the Sanctum to the Outer circle may be a bit more difficult as you will see in a moment. But first let’s take a look which portals are connected with each other.

So, in order to reach a specific Outer portal, you will need to find the correct Inner portal. If you look at the symbols of the map, you may notice some common factors in the symbols.

All the portals in the western part of the city, have the sloped line:

All the portals in the eastern part of the city, have the small hook in the center:

Further, the portals in the southwestern and northeastern part of the city also have the cornered line in the left part of the symbol: