This page is for information on the EverQuest User Interface. 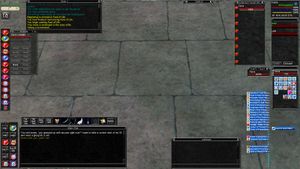 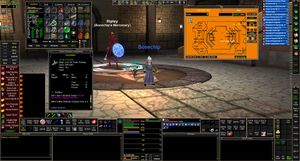 Click this thumbnail to see SparxxUI in a larger size

Alternate download site: Microsoft Live OneDrive - Single pieces as well as zipped "Fanrasui##" and "geddinesmini##". Download the "Fanrasui##" (the # represent the number of the current version, it is suggested you use the highest number available) if you just want one zip file with the UI you can unzip and use.

Sparxx is a Featured Artist over at EQInterface.com, and SparxxUI is rated #1 by popular vote.

Lists of all known console commands[edit]

Lists of commands shown in game[edit]

Not yet tested is this possible way to prevent the Welcome screen from appearing each time you log in:

Inside your Sony folder in EverQuest there is a file called eqclient.ini....open that file with notepad and about half way down inside that file you will see this "DetectWelcomeFailure=1" except yours will say =0 change the zero to a 1 and and save the file. When you restart EverQuest it will tell you in your window that there was a problem with the welcome screen and that it has been disabled, from now on it will not load when you load the game.

There are two standard ways to block buffs.

First, if the buff is in your buff window (regular or song), you can right click it and choose to block it.

Secondly, especially if the buff is not in your window (or if it is a spell that does not buff) you can click the EQ button on your screen, go to Character > Blocked Buffs and Add by Name. It is not necessary to put the rank of the spell when you Add by Name. If you block a buff on one rank, all ranks of the spell are blocked.

You can block buffs for both you, and your pet (Character > Blocked Pet Buffs).

Note that you can block spells and AAs, not just buffs.

A good example would be for an enchanter to block paladin splash spells on their pet, so as to prevent splash from breaking charm on charmed pets. Entering "Splash of Sanctification" (or whatever current name of the splash spell is) into the Add by Name should prevent it from landing on your pet. The level 118 Splash of Repentance may be blocked by entering /blockspell add pet 62390.

This should work just fine. However, below are some alternate ways to block buffs.

The first step is to get the ID of the spell. Go to Lucy at Allakhazam.com, search for the spell. As an example, we will use Voice of Clairvoyance. You will see something like this:

Click on the Raw Data link (red oval in screenshot above). You should see this:

Go down the page to

The easiest way is to use the /blockspell command in the in-game chat window.

It is possible to block spells that don't have buff icons via your .ini file. Make sure you are logged out completely before doing this.

Open up your EQ folder and find a file named charactername_server.ini (with your character's name and your server's name in place of "charactername" and "server" respectively). Note that if your Windows operating system is set to hide file extensions (it is by default), then you won't see the .ini at the end of the file name. Double click on the file to open it. Look in the opened file for something like:

You just replace -1 with the ID, example: BlockedSpellID0=5522

This would put Voice of Clairvoyance into your blocked buff list. If you wish to take it off, just find the ID of the spell you want to remove and put it back to -1 and the spell will be removed.

The number of spells (effects, buffs) that you may have on your character at one time:

The AA to purchase buff slots is called Mystical Attuning.

Maximum possible with The Darkened Sea appears to be 42.

As of the The Darkened Sea expansion, you may purchase up to 24 slots with Mystical Attuning.

The number of short duration buffs (song window) you may have was increased from 20 to 30 in April 2014. If you go over 30 it overflows into your normal buff window until that fills up.

It is possible to set up your Bandolier so that it switches out your normal range item for your throwing item, throws it about three times and then switches back to your normal item, and do so by only having to hit one key.

This may also work for bows and arrows, however, we need a report to confirm.

To do so set up a social as follows: 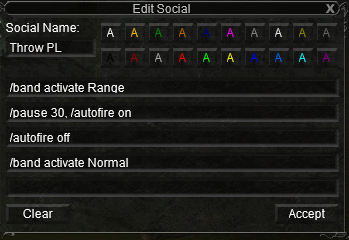 The /band activate Range command tells the Bandolier to switch to the "Range" set of weapons. Put in the name of your throwing setup in the place of "Range".

The /pause 30 time might need adjusting depending upon your throwing item's speed. With a monk using a 15 delay weapon, /pause 15 was a good number to throw it three times. Your mileage may vary.

The /band activate Normal command switches back to the "Normal" set. Again, put in the name of your setup in place of "Normal".

Adding locs on a map[edit]

While you're not in the zone, open up the map file in a text editor (hopefully not Notepad, because it's kind of nasty). Add in the location you're interested in. Bottom, top, doesn't matter.

The format of the map files is simple enough anyone can manage it:

P = marker telling EQ this is a point of interest which should be labeled. Most of the rows say L which describes a line on the map.

157 = second number of the /loc with the sign changed.

-59 = first number of the /loc with the sign changed

Crescent_Reach = The text of the label. Spaces aren't allowed, but underlines show up as spaces on the map.

To make parts of your socials look like item links, do the following:

You must not be running EQ.

In your EverQuest folder open up the file "<charactername>_<server>.ini" (example "Fanra_bertox.ini"). Note that by default Windows hides file extensions, so if the ".ini" part of the file name might not be shown. Windows should show it as a "Configuration" or "INI" file.

Save the edited .ini file. Start EQ and it should work.

Note that the above link will show an emerald if someone clicks on it. The numbers can be changed to any item in the game.

To get the numbers for other items, in game turn your log on, bring up the Item Display window for the item you want a code for. Type ;tell (click item icon) spam - then go to your log file and you will see the item code followed by part of the item name, like this one for the Weighted Hammer of Conviction:

IMPORTANT NOTE: Because of the way MediaWiki displays text and that I can't figure out the exact Unicode symbol, instead of using the � symbol, you need to download the sample file Colored Socials.ini and copy and paste the symbol used in it. You can change the numbers to match the item you want to use and the text to match the text you wish.

Adding symbols to your socials[edit]

Want to add ♪ and ♫ and similar symbols to your socials?

You may get a message that it cannot be saved in the current format and still show correctly. In that case, save it in the file encoding UTF-8.

Changing the color of group member's "x" on map[edit]

Go to your file UI_Playername_Servername.ini.

Change the GroupColor to any color you want. You have to pick numbers between 0 and 255.

Alternate method includes your own arrow[edit]

The March 16, 2012 patch changed the map window and added the ability to change the color of the player on the map window from black. The ini for it (MyColor) is found in the [MapViewWnd] section of your character's ini file and defaults to blue.

Additionally, the ability to change the group color, the local player color, and the find path color is now available through the Map Toolbar window. New buttons in this window to allow easy modification of each of the color options.

The command for the Discipline Throat Jab would be:

Put in the name of other Disciplines in the place of Throat Jab to use them.

In the Inventory window, there is a Stats tab. It lists your stats in the form of:

YYY being your current CAP, based primarily upon level and AA's, though some buffs will increase some stat caps.

+ZZZ being the amount of Heroics you have for that stat.

To make most players and NPCs appear as red stick figures, add the following to your eqclient.ini file (under [Defaults]):

That should help your frame rate among large numbers of figures. It doesn't seem to change the appearance of Drakkin, however, for some reason.

Preventing the Voice Bar from appearing[edit]

If you find the Voice Bar shows up on your screen every time you log in and you don't want it to, go to your EverQuest folder and edit your charactername_servername.ini file (note: "charactername" would be your character's name and "servername" is the name of your server).

You can change the format your screenshots are saved in by adding the "ScreenshotType=" line in your eqclient.ini file, which is in your EverQuest directory.

To save in bmp format you would change or add the line to read "ScreenshotType=bmp". Supported formats are bmp, jpg, tga, dds and png. Screenshots will continue to save in jpg format unless this line is added.

They used to be in bmp, which made huge files. That was the reason it was changed to the current jpg.

According to Kelandi in this EQ forum post, you open your eqclient.ini file and make sure the following is set under [Defaults]:

Note that the hold-right click menu does not appear on the button in your Actions window. It only appears on a hot key you place in your hot bar.

Granting a group member the Mark NPC role permits the character chosen to place a "1", "2", or "3" over the heads of the mobs they select. This comes in handy for allowing the entire group (or raid if you give someone the Mark NPC raid role using the raid tool) to see which mobs you are referring to.

Using the EQ button > Actions, you can make mark keys. You can also use the commands /gmar # or /rmar #.

In order to be on the ground with levitation on you, press and hold the End button on your keyboard, then tab (or alt-tab) out of EverQuest. Once you are no longer in EverQuest, release the End key and then when you come back to EverQuest, you will be grounded.

You can update these settings to move the window, followed by relogging (or typing /loadskin default). You might be able to tell which window is the broken one if the bounds are outside your screen resolution.

in the EQ folder right click eqgame.exe and go to properties -

and set drop down to system.

If this works then you will want to write it down because sometimes the eqgame.exe file gets overwritten and you will need to re-adjust the setting