The citizens of Qeynos who have disappeared have become reanimated by the power of this place. Kyle Bayle and his undead army are locked away at the top of the tower. In Bayle’s possession is an artifact of great power, the legendary Qeynos Claymore. This powerful artifact may be one of the things that is needed to send Lady Lendiniara back to her proper Thread and, in the process, stop further damage from coming to Norrath.

However, Lord Bayle has been expecting your arrival. If you seek to challenge him and his forces, he knows as well as you do how this encounter will end... 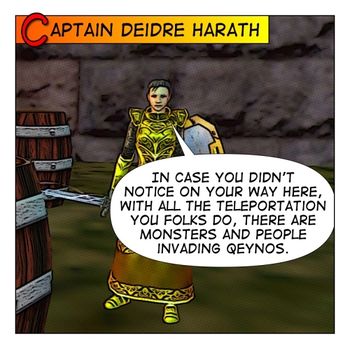 Minimum level to get these quests is 65. The content is tuned for level 85 and higher. It may take a small group to complete them.

There are four quests. Three began on May 14 and will end on July 7:

One will begin on Saturday, May 17 and also will end on July 7:

Reward for completing all four is suffix title: Defender of Qeynos.