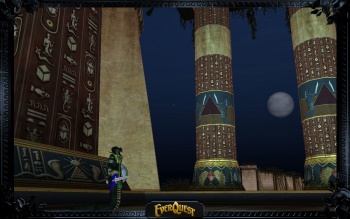 The zone is divided into four areas.

While the shards of fear were falling on Norrath, a significant shard landed in a remote part of The Grey. It was discovered by one of the undead Shissar stalkers who delivered it to a Shissar Vyzh'dra. Vyzh'dra recognized the power of the shard immediately. He recognized the power of Cazic-Thule. Rather than embracing the power and being overwhelmed by it, this Shissar isolated the shard and began to work on a plan to regain their empire and free themselves from the prison they made for themselves in The Grey.

He encased the crystal in a magical container and has begun experimenting with siphoning off some of its power.

Not too long after this, a new city emerged in the middle of The Grey. It is a massive and pristine city reminiscent of ancient Shissar architecture and designs, and outsiders seem confused as to how it came to be. No one has come out of the city since it arrived.