Rain of Fear is EverQuest's nineteenth expansion. Released November 28, 2012. Additional content was added April 17, 2013 with the Shadow of Fear game update, and on July 16, 2013 with Heart of Fear.

From EverQuest.com - Expansions Rain of Fear:

Autonomous Brokering is a system which allows you to sell items while off-line. It also includes being able to purchase items from anywhere in Norrath.

Note that you can use the Find menu to locate these.

Stone of the Shard's Fall, sold by the portal crystal NPC for 263pp, will take you to Harbinger's Outpost in Shard's Landing.

The Stone of the Shard's Fall was not on sale when the expansion was released. For the same reason the druid and wizard ports were not available, see below.

The Signet of the Crystal Circle will take you to Shard's Landing.

It appears that traveling around RoF will be much easier than other expansions.

There are no portals to Kael Drakkel: The King's Madness, The Corrupted Temple and The Crystal Caverns: Fragment of Fear. 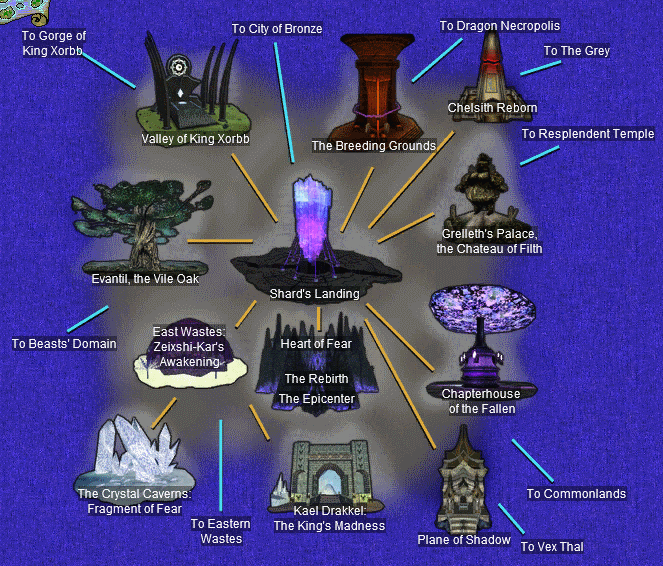 You may also go to the Sepulcher of Order by dropping down the crack in the center of the zone in Shard's Landing. It is recommended that you have levitation on, as you arrive above the ground. It also may not be a safe spot, so being able to evacuate to the zone in while floating down is a good idea.

It appears there is no group progression in RoF. There will be two tiers of group content. The difference appears to be in mob difficulty and loot. There are no locked zones.

Most information on Rank II and Rank III spells and Type 3 augs obtained from EQ Resource.

You can go to various NPCs at p400, p75 in Shard's Landing and buy Rank I spells.

Rank II spells are obtained by turning in "Dreadmote" items to Tomekeeper Kerkaz in Shard's Landing. Tell him, "Dreadmote". These Dreadmotes drop in all Rain of Fear zones. Each named has a chance to drop one. Mission Chests also drop a single Dreadmote. You can 'downgrade' your Dreadmote to a lower level one if you wish by picking that option as a reward of the turn in quest.

Rank III spells are obtained by turning in "Terrormote" items to Tomekeeper Kerkaz in Shard's Landing. Tell him, "Terrormote". These fragments drop from chests on RoF Raids. You can 'downgrade' your Terrormote to a lower level one if you wish by picking that option as a reward of the turn in quest.

All type 3 focus augs are available from Tomekeeper Kerkaz, who is located in Shard's Landing at the Harbinger's Outpost. The augs cost approximately 15.7k plat each.

In Rain of Fear, no templates are needed to make the armor.

What will not pleasantly surprise you is the price of each of those items is 13k and 11k platinum respectively.

To make Tier 1 group and raid armor, place the dropped item in a Rust-Tinged Box of Fear and hit the Combine button (the box isn't consumed, and can be used unlimited times).

Beastlords, Necromancers, Shadowknights, and Shaman can change the focus on their wrists by placing it in a Rust-Tinged Box of Fear and hitting combine.

In addition to mob drops for raid armor, you should be able to use raid alternate currency to purchase it.

There are several new types of alternate currency in Rain of Fear.

Expedient Delivery Vouchers are purchased with Station Cash and are used to have items delivered directly to your character after being purchased from a player trader.

Armorer Jean Wenlaris in Shard's Landing sells Tier 1 raid gear for this currency. You must complete Tier 1 raids in order to earn Velium Shards and each raid will unlock different items.

Ilana Sunmire in Shard's Landing sells Tier 2 raid gear for this currency. You must complete Tier 2 raids in order to earn Crystallized Fear and each raid will unlock different items.

Serroth Dantor in Shard's Landing sells Tier 3 raid gear for this currency. You must complete Tier 3 raids in order to earn Shadowstones and each raid will unlock different items.

Crusader Tolsk in Shard's Landing sells Tier 4 raid gear for this currency. You must complete Tier 4 raids in order to earn Dreadstones and each raid will unlock different items.

Those who purchased an SOE Live All Access Pass will receive the Standard edition at no extra cost. For an additional $20 they may pre-order the Digital Collector's Edition instead.

To order the Digital Collector's Edition, go to the RoF order page. Click on the Pre-Order Now! button and sign in. There you should see something similar to the image to the right. Just order the Digital Collector's Edition and as you go through the process, it will look like you're buying it for $59.99, but on the page where you select how to pay for it, is a tiny line of text way at the bottom, where no one would normally think to look, and it says SoE live attendees will only be charged $20 when it comes to the actual time to bill it.