The Darkened Sea (TDS) is EverQuest's 21st expansion. It was released for All Access members on October 28, 2014 and for Free to play accounts on November 11, 2014. Purchase of either the Standard or the Collector's edition is required to access TDS.

The Darkened Sea comes in two editions, Standard and Collector's.

The Heroic Character will come with:

The December 2014 game update added the following items to the Colllector's Edition:

In addition, if you want additional Armor Battle Cat colors, they’ll be available in the Marketplace for 2995 SC, only for players that own The Darkened Sea Collector’s Edition.

Those who already own the Collector's Edition are able to /claim these items after the game update.

Higher tier zones are locked until you complete certain missions. 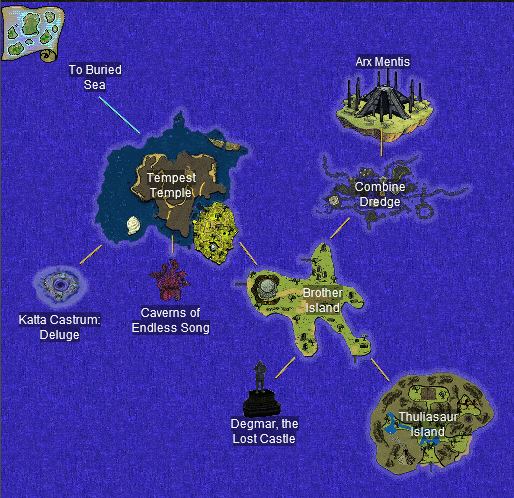 It is believed that all classes can bind in Katta Castrum: Deluge. Casters and priests can also bind in Brother Island, Tempest Temple and Thuliasaur Island.

Some zones will be locked until you complete certain missions.

Completing the following missions will grant you access to Caverns of Endless Song:

Completing the following missions will grant you access to Degmar, the Lost Castle:

Completing the following missions will grant you access to Thuliasaur Island:

Completing the following missions will grant you access to Combine Dredge:

Completing the following missions will grant you access to Arx Mentis:

To request the raids, you need to do all the quests in Zone unlocking above as well as the following Arx Mentis tasks:

New to TDS are "One Off" raids. These raids will give participants a 4.5 day lockout upon requesting the raid. The lockout remains even if you fail. Both One Off raids spawn when you beat Defense of the City. However, Praetor Vitio spawns in the Tier 2 part of the zone and not accessible without flagging.

All seven raids take place in the same instance of Arx Mentis. You can request the raids from Firiona Vie in both Katta Castrum: Deluge and Arx Mentis.

You have to flag for access to Tier 2 and Tier 3 raid instance areas. Unflagged players entering the higher tier areas get kicked to the entrance area.

Rank I are purchased from vendors in Katta Castrum: Deluge. They can be found using the Find window (Ctrl-F).

Rank II spell essences drop from any random mob, more often from named mobs. Right clicking on the essence will pop-up a reward window, no need to turn them in.

Rank III spell essences are gotten from raid chests. Right clicking on the essence will pop-up a reward window, no need to turn them in.

See: Getting to TDS

There are three tiers of group gear and one tier of raid gear.

Even though there is only one tier of raid armor, you still need to use a Combine Armor Matrix with the Synthesis Chamber to make it.

For TDS, faction matters once more. In order to get some quests, you need good faction with various groups. See the main article for details.

Most quests and instanced missions in TDS do not have rewards chests for completing them. Some do.

Preview videos below released by SOE. Note that they are all without sound except for the robes video:

All are welcome to use them for fan websites or personal use. Videos copyright Sony Online Entertainment LLC.