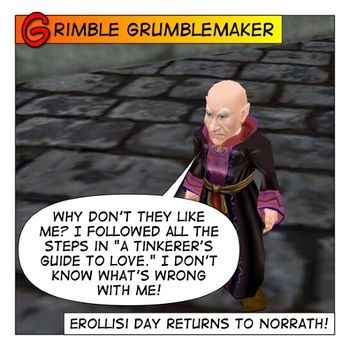 Erollisi Day is a day for love. It is EverQuest's equivalent of Valentine's Day, and is also observed in February. It is named after Erollisi Marr, the Queen of Love. 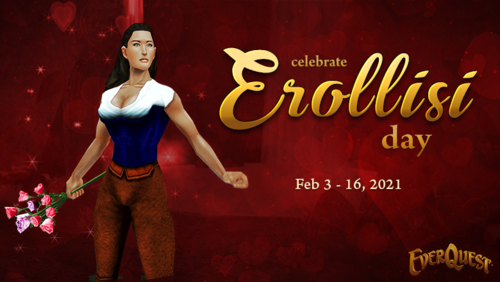 There are a number of limited time quests, achievements, collection sets, nimbuses, Hero's Forge ornaments, and, of course, marketplace items during the Erollisi Day celebration.

You can view this in the Achievements window under Events > Holiday.

Note that it has been reported but not confirmed that to complete the achievement requires that you own the Rain of Fear expansion.

Complete the following to get this achievement:

Reward for completing Erollisi Day achievement is all of the following:

Here are some collection sets only around during the Erollisi Day celebration. You can view them in the Achievements window under EverQuest > Collections.

Lore: "Fairest Rosin, for years I have admired you silently. No more! I must tell you of my love directly. Meet me in the room I rent from Jac tonight."

Lore: "I never knew writing could be sexy before I read your Gazette, Grot. Your words pierce my heart like arrows of... um... loviness. Youch!"

Lore: "Are you free after work tonight, Teria? Perhaps you'd be willing to show me how to bake those delicious muffins."

Lore: "Hey sexy. Come down to the bar after hours and we'll put the McDonalds' famous Drink of Timeless Energy to use! -Becka"

Lore: "I heerd sumone kall u Lakgara teh Riteous. How bout I shows you how too be a bad gurl?"

Lore: "I've heard the rumors, Mac. Just tell me where and when I can get under that kilt. I'll be there."

Lore: "My beautiful Spirita, I love you more than I can bear to say. But would you please ask your sisters to stop pretending to be you when I stop by? It's quite confusing."

Lore: "It's been 30 years, my dearest Brin, and you still find ways to surprise me. I love you more every day. I don't mind growing old, as long as it's with you."

Lore: "I've seen the way you stare at me while I practice my spells, Tolax. It's creepy and if I see you doing it again, I'll rip your tongue out."

Lore: "I swear, Tal. If you wear my clothes one more time, you'll end up in the oven alongside the rest of the worthless meat! Do your own laundry!"

Lore: "Jacker, you not invisible. I see you on balcony roaring at me all day. You are a big idiot! -Namarg"

Lore: "All you trolls stupid. I happy to use whip on you, but I use it my way. And you won't like it. -Pungla"

Lore: "I find dwarf finger in my shinies pile again, Gobbler. No snacks in my store! Stay out! -Canarie"

Lore: "The gauntlet I bought from you snapped in half during my first fight, Jarvah. Your armor's worthless and your hair is ridiculous!"

Lore: "ATTENTION ALL GUARDS. I STILL SEE RATS IN THIS DISTRICT. FOREIGN DISTRICT WILL BE A RAT-FREE DISTRICT. THAT IS MY PLEDGE!"

Collect four head ornaments. They drop off of any random mob level 10 and above during Erollisi Day celebration.

Erollisi Marr, the Queen of Love

Erollisi Marr · The Queen of Love

Followers of Erollisi Marr, the Queen Of Love, cling to the belief that love conquers all. It should be pointed out that while love is a generally peaceful concept, Erollisi worshippers are not pacifists. They would like to live in a world where everyone loves everyone else and violence does not exist but they are not naive enough to think that Norrath is that world.

They are passionately devoted to people, places and ideas and are more than willing to fight and die to preserve those things. The dream of every follower of Erollisi is to die in the selfless defense of someone or something they love. Many paladins hear the true calling of their hearts and follow Erollisi Marr.