Hero's Forge is a armor augmentation ornamentation system which went live on August 15, 2012.

Viewing Hero's Forge armor may be disabled (for performance or aesthetic reasons) in the Options > Display tab > New Armor. You can choose to have it on for everyone (default), your raid, your group, yourself, or no one at all.

For information on how to obtain the armor, see the Armor sets section below.

You only need one wrist piece to show both wrists. Put the armor ornamentation on the right bracer as you are looking at your inventory. Then when you zone the look will not change.

In the June 19, 2013 patch new versions of the armor were introduced. The new versions are less bulky. To switch between the old and new versions, take the ornament off, place it in your inventory and right click it. You can change back and forth as often as you wish.

Initial Hero's Forge armor sets and how they are obtained. 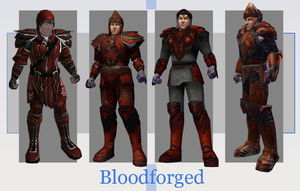 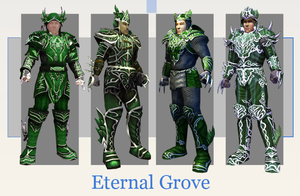 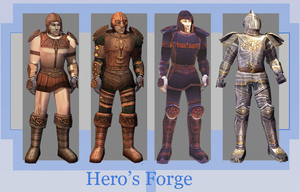 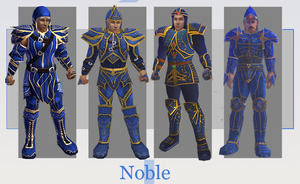 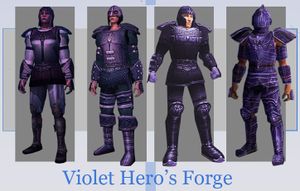 Although the armor has "sets", you can wear pieces from different sets (e.g. Noble chest and Eternal Grove legs). You mileage may vary on how well it will look.

This section lists some of the sets. To see a listing of all sets your character can wear, look in your Achievements window under General > Class.

You may purchase a robe from Keliss Arden in PoK. Additional robes were released with Rain of Fear.

It was also mentioned that the "Trivial Loot Code" applies. That means that the mob must be dark blue or higher to every member of a group or an armor piece will not drop.

Eternal Grove and Insidious are available for purchase for VoA Alternate currency. Prices are 120 Rebellion Chits or 240 Diamond Coins or 800 Bronze Fiats per piece.

Some Hero's Forge armor may be created using tradeskills.

Highlights with approximate timestamps where it starts: