The Call of the Forsaken expansion introduced mercenary equipment, gear you can put on your mercenary.

As of the Terror of Luclin expansion, the best mercenary equipment is "Vigilant", which is obtained in The Burning Lands zones.

In the February 15, 2017 game update, changes were made which also fixed the above bugs:

- Mercenary equipment has been simplified and improved:


- - Mercenary equipment slots have been changed from head, chest, primary, and secondary to ear, neck, shoulder, and waist in order to correct a bug that would cause melee DPS and tank mercenaries to become less effective when wielding primary/secondary equipment.

Call of the Forsaken

a merchant (Mercenary Gear Merchant) in Arx Mentis. He sells gear for Pieces of Eight.

It can be purchased for Sathir Trade Gems in Lceanium. 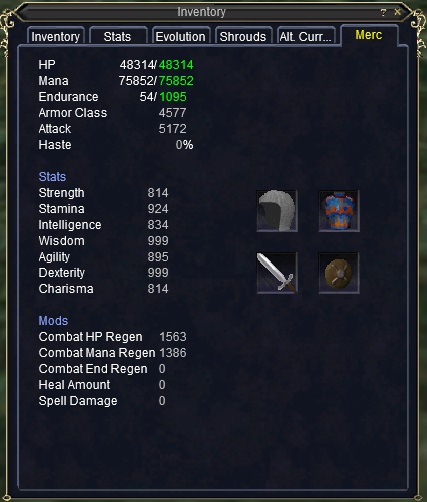 Some items are both Primary and Secondary.

Some items are both Primary and Secondary.