The Broken Mirror (TBM) is EverQuest's 22nd expansion. It launched on November 18, 2015 with beta testing having begun on October 21. Purchase of either the Standard, Collector's, or Premium edition is required to access TBM.

Most items are only one per account. Some items are not available on Time Locked Progression servers.

All Access members should receive a 10% discount on purchasing any of these expansions.

The Collector’s Edition of The Broken Mirror will be available for $89.99. It includes all of the items from the Standard Edition, plus the following:

The Premium Edition of The Broken Mirror will be available for $139.99. It includes all of the items from the Standard and Collector's Editions, plus the following: 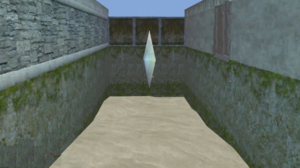 Plane of Tranquility portal to Plane of Health 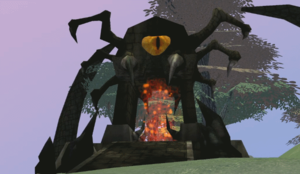 Plane of Tranquility portal to Plane of Fear: Revisited 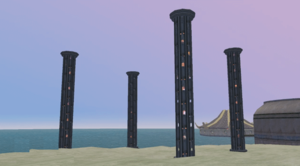 Plane of Tranquility portal to Plane of Hate: Revisited 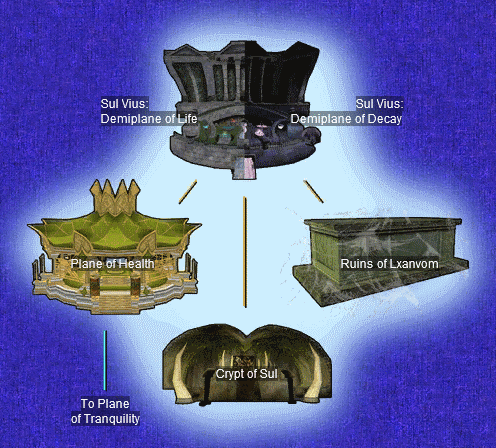 Possession of Mirror Fragment of Anashti Sul will permit you to zone back and forth between Decay and Life demiplanes. If you have completed the Mercenary and Progression tasks in every TBM zone, you can use the mirror from Plane of Health to enter Decay and Life. This item is gained from the quest Into the Temple (b) in Sul Vius: Demiplane of Life.

Characters cannot bind anywhere in The Broken Mirror. The closest place you can bind is in the Plane of Tranquility.

The Crypt of Decay (Ruins of Lxanvom), Crypt of Sul, and Plane of Health zones give every character in the zone a detrimental effect. The effect happens when you enter the zone and remains as long as you are in the zone.

These effects can be reduced or removed by completing quests in the zones. See this thread on the Daybreak forum for more information.

For access to Sul Vius: Demiplane of Decay and Crypt of Decay you need to complete the following quests (in order):

Completing them will grant you Mirror Fragment of Anashti Sul which is the key to enter those zones.

At that point you will be able to request Crypt of Sul quests and Heroic Adventure.

You must then do the following quests six times each and click the collectible from the quest reward:

The Crypt of Decay and Crypt of Sul have a zone-wide effect which reduces your hit points and mana. The Lesser Spirit Armor achievement is supposed to mitigate this. However, it does not.

To mitigate it, you must complete all partisan, mercenary, and hero tasks. Alternately, you can spend extra money and purchase the Collector's or Premium Editions which grant items to mitigate it.

Rank I are purchased from Warlowe Rida (Spells) next to Quellious in the Plane of Tranquility. She can be found using the Find window (Ctrl-F).

Rank II spell essences drop from any random mob, more often from named mobs. Right clicking on the essence will pop-up a reward window, no need to turn them in.

Rank III spell essences are gotten from raid chests. Right clicking on the essence will pop-up a reward window, no need to turn them in.

See: Getting to TBM

Among the other, more normal, spells, each class gets a progressive "Dichotomic" spell or discipline with six ranks that levels as you complete TBM progression. This spell is touted as a powerful spell / discipline customized for each class.

They are purchased from Warlowe Rida (Spells) next to Quellious in the Plane of Tranquility. She can be found using the Find window (Ctrl-F).

The Dichotomic spell is not scribed in your spellbook in the normal fashion, instead right click the scroll you buy from her.

To level up the spell, you need to right-click the item granted as a reward for the following achievements:

There are 3 tiers of group gear and 1 tier of raid gear.

There is no combination box. Right clicking the template will give you the armor piece for your class.

These merchants are next to Quellious in the Plane of Tranquility:

These merchants are near the center of the Plane of Health:

The Broken Mirror introduces no new tradeskill items other than Wither and Decay Hero's Forge Ornaments. To create them requires you to scribe The Lost Art of Working With Wither and Decay.

At about 21:03 of the full live stream video, this briefly flashes on the screen (warning: spoilers):

Quellious has heard of a new goddess, one suddenly allied to her friend Rodcet Nife

Her worshipers in Sul Vius: Demiplane of Life believe that their unwavering faith in Anasthi Sul earns them a second venerated and immortal life

Her worshipers in Sul Vius: Demiplane of Decay believe that it is only after death that one can properly serve Anasthi Sul. All the dead serve her, and faith has nothing to do with it

- A version of the goddess found herself in our realm, changed
- She now has two aspects, Life and Decay

- It exists in two forms, representing the dual nature of their goddess

Those who pre-order will receive a bonus: Shroud of the Bokon. This is an illusion item. You only get one per account.