Tribute is a system where you can donate certain items to a tribute NPC and gain points which may be used to convey bonuses to your character. Toggling tribute on spends tribute points every 10 minutes. There is both individual and guild tribute. In addition, tribute points can be spent to activate some trophies.

The base number of personal trophies you can have active at any given time is 4. However, completing the collection achievements in Call of the Forsaken, The Darkened Sea, The Broken Mirror and in Empires of Kunark will each add one additional trophy slot, bringing the total to 8. See List of Collection items for a list.

The chat commands /tribute and /trophy enable personal and guild tribute, as well as trophy tribute, to be toggled using these commands.

It is believed that tribute effects count as "worn" item effects, so only the strongest of them will count. If you have an equal or greater worn effect item, the item will be used and the tribute does nothing. 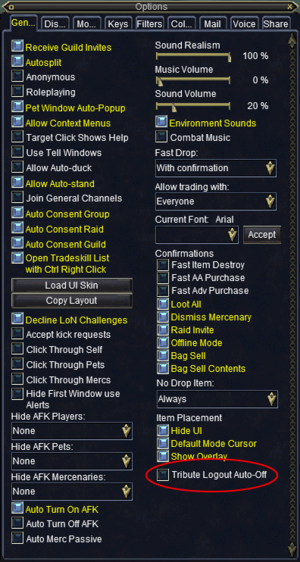 With the September 17, 2014 patch, you may toggle an option to automatically turn off [spending] tribute when you are not logged in.

From quick testing it appears that if you enable Tribute Logout Auto-Off, in addition to turning it off if you camp out, it will also turn off your tribute if you go link dead or quit the game.